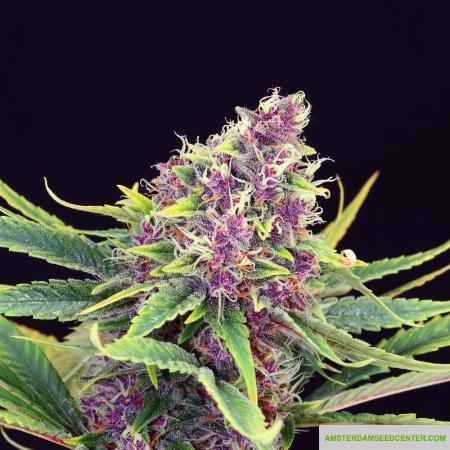 Purple Kush is an pure indica strain and has a level of 22% THC. The CBD level of this strain is low. Purple Kush is related to Hindu Kush and Purple Afghani . Purple Kush seeds wil grow into a short cannabis plant yielding an average sized crop. It is not hard to grow these Purple Kush seeds, you keep an eye on this plant will it grows, It takes just 55 days of flowering before the crops are ready.

The Purple Kush has Sweet, Berry, Grape, Earthy and Pungent flavors while the effects of purple kush are reported as relaxed, happy, euphoric, hungry and sleepy.Purple Kush seeds are available to buy in 80 seedshops online, compare the offers and find the best deal before you order your Purple Kush seeds.

Is it good to know what the flavor of Purple Kush is before you buy Purple Kush seeds online. It said Purple Kush tastes mostly like:

You want to buy Purple Kush seeds? Get yourself informed about the effects of the Purple Kush strain. Purple Kush is known for the following effects:

Where to buy Purple Kush seeds

We have listed all seedshops where you can buy Purple Kush cannabis seeds. Compare prices and offers before you buy Purple Kush seeds and get yourself the best deal available.

Read what other people has to say about Purple Kush seeds.

Purple kush is an amazing antianxiety strain two hits and you've forgotten what you were worried about.

Diego Castro from Saint Vincent and The Grenadines

Again, this is more of a commentary than a review... Let me start off by saying that I am not personally a big fan of most versions and phenos of the famed Purple Kush, although I don't hate it. Just posed with an option, I usually won't choose the PK first. That being said, Seedsbay has left out the fact is that there are a few known different versions of the widely popular Purple Kush strain... All 3 are supposed to be clone-only. Where I'm located (toronto, the most commonly available version of PK is the SR-71 cut. It is usually very similar to Purple Urkle (possibly a hybrid) and has the typical "purple"/hashy grape flavor — it was distributed mostly by the SR-71 (now Blue Sky) Coffeeshop in the "Oaksterdam" section of Oakland, CA and most likely is a Purple Afghani x Hindu Kush. It was originally named "Ultraviolet" by its original grower in Oakland, CA (credited as "K" from Trichome Technologies according to SR71's catalog). The Garberville Purple Kush (GPK) is most notably held by Swerve, of Cali Connection Seeds fame, and tends to grow with some foxtails and has more of a straight-up Kush taste/smell with hints of "purple". The original cuts of GPK are shrouded in folklore, so there are several different phenotypes around, but generally a flowering time of around 55 days should be expected. This can extend to 70 days with particularly late-flowering cuts. It grows most favorably in soil or hydro set ups, but yields heavily in all media as long as it’s tended to properly. As ever with Blue or Purple strains, cooler temperatures will bring out the great-looking coloration. Kyle Kushman's Las Vegas Purple Kush (LVPK), was claimed in a New Yorker article, to be a special Purple Indica x Northern Lights find, but many have since claimed it's an S1 Bubba Kush of some kind due to the dark flavors present. Still, many old-school people claim that none of the famous clone-only PK's around are in fact the original Purple Kush, which is said to be a very special Purple Pakistani variety that was found in the late 70's or early 80's.  As you can see, the history of a strain that's been renamed several times and has several legit versions floating around gets very murky quickly. Aroma: Pungent, with notes of "purple" (incense, perfume, musky grapes), and the spicy Kush end of the spectrum as well.  The SR-71 and Garberville cuts are more "purple" in both flavor and smell compared to the Kyle Kushman/Las Vegas Purple Kush. Qualities: Eminently relaxing and rather potent, Purple Kush is definitely in touch with its Afghani-Pakistani roots.  Coming on with a slight rush of energy, that subsides quickly and leaves the user with a floaty, highly medicated body experience that makes aches and pains as well as anxiety/stress melt away.  Purple Kush is also known for being a long-laster, normally going out to the 3 hour mark.  Recommended highly for body pain, muscle relaxation, mood elevation, appetite stimulation, and sleep aid at higher dosages.

Read all reviews on Purple Kush seeds, or write your own!

These seeds are related and similar to the Purple Kush seeds.