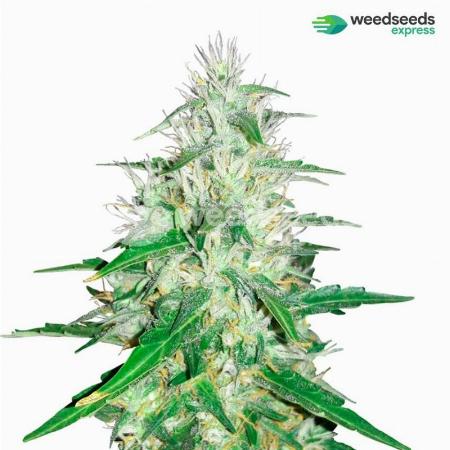 This Power Plant strain is a mainly sativa strain with a THC level of 15 percent. The CBD level is 2 percent average. Power Plant is related to the following strain; African and has a levels of 65% sativa and 35% sativa genes. Grow Power Plant seeds and it will result into a stunning cannabis plant with nice buds. Germinate the Power Plant seeds and grow it into a nice cannbis plant, a fast flowering period of 56 days before the plant is ready.

Is it good to know what the flavor of Power Plant is before you buy Power Plant seeds online. It said Power Plant tastes mostly like:

You want to buy Power Plant seeds? Get yourself informed about the effects of the Power Plant strain. Power Plant is known for the following effects:

Where to buy Power Plant seeds

We have listed all seedshops where you can buy Power Plant cannabis seeds. Compare prices and offers before you buy Power Plant seeds and get yourself the best deal available.

Read what other people has to say about Power Plant seeds.

First of, i'm quite a big guy with a pretty high tolerance. But this weed hit me like a truck. i haven't been this far off sober in a long time, so you can already see that this weed is quite the powerhouse. The smell: The smell of the strain didn't show much of the potency of the weed. it kind of a smelly weed in the good sense of the word. When you first open the bag or container you're hit with a kind of sweet earthy smell that frankly made me want to keep smelling it. When you take a better sniff of it you start to notice the subtle smell of wood mixed in with the more dominant earthy smell. It is without a doubt a pungent weed and might not be a good weed to get if you're not fond of the smell of weec. The taste: I'd like to start of saying i smoked this weed in a joint so user experience may vary depending on what methode you use, but now back to the weed. The first puff i took i was imidiatly met with that same earthy smell and taste, although it was less doninant when smoked. It also made more way for the slight taste of wood and a littel peppery aftertaste which, might i add, wasn't unpleasurable at all. The taste isn't really all that special if i'm completely honest but it did remind me a bit of skunk, so if you're a fan of skunk strains, you should try this one. The high: like i said in the start, i'm a big guy, and normally need a gram of good weed to get me super baken when i haven't taken a break for a while. So here i was happily smoking away with a friend. At first i really didn't notice anything, only tbing that happened is that i got a bit giggily. Fast forward, when i had smoked around 1/3 of the joint it suddenly hit me, and it hit me hard. First thing i noticed was that it was getting a bit harder to focus, i figured that the weed was starting to work a bit. After that things get a little harder to remember, i suddenly got a surge of energy and had to stand up and walk a bit, i got really energized and so did my friend. We talked for quite a while before i noticed my body feeling numb. I couldn't feel my muscle pains anymore, i basicly felt nothing, i even forgot i was standing so i decided i was better of sitting down. The energy levels reay didn't drop for the entire duration of the buzz, neither did the uplifted and happy feeling i was experiencing, hell, i even enjoyed having to ride my bicycle home. The side effects: There isn't much i can say here other then that it gave me a bit of a cotton mouth and my eyes were super red, nothing a cold drink and some eye drops can't fix. The verdict: I think i've fallen in love, this strain is precicely what i look for in a weed, it's powerfull, smells nice, and gives of a great high. This is a great weed for people with a high tolerance and it's relitivly cheap aswell. If you ever have a chance to pick up a bit of this stuff, you should.

This weed when smoked had a weird spicy woody flavor to it that when exhaled immediately hit you harder than a train, giving you effects that make you feel powerful. Great strain for lifting. 4.5/5

Read all reviews on Power Plant seeds, or write your own!

These seeds are related and similar to the Power Plant seeds.